It's the Saanich Peninsula Hospital Auxiliary 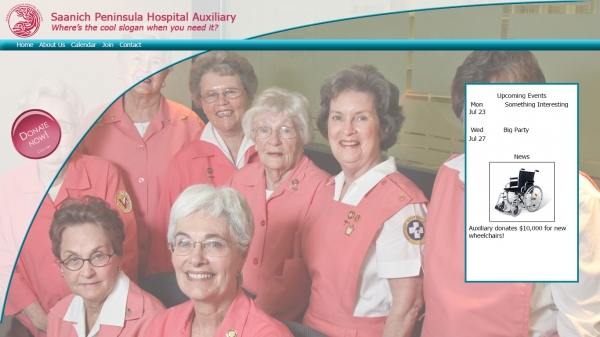 They need a web site and they want Pixelsplash to help!

It's always nice when trying to do good works out.  As a part of volunteering for the Victoria General Hospital Auxiliary I did a web site for them.  Apparently Val Smith, the president, was pleased because she referred the Saanich Peninsula Hospital Auxiliary to me and this time it's not a volunteer position.  Who says no good deed goes unpunished?

I've been noodling around and I've got a rough draft which I've sent off for review.  There is, of course, a lot of cleanup that needs to be done including getting a photograph of their own volunteers which I have rights to but so far I kind of like it.  Now we'll see if they like it and if I can actually build it in Joomla.